Yadkin Valley Quilts is excited to participate in the Row by Row Experience again this year! The theme is "Taste the Experience!", and our row is titled "Experience the Tastes of Elkin". Like last year, we have chosen to spotlight some of our local favorites! In addition to loving all things fiber and fabric, we love food! And old buildings! And architecture! And ELKIN!

"Experience the Tastes of Elkin" features Royall's Soda Shoppe, The Liberty (home of Angry Troll Brewery, Restaurant & Taproom and Coley Hall) and Southern on Main. Each of these restaurants has its own unique culinary and aesthetic vibe and adds much to our community! Keep on reading to learn more about these local favorites!

Free patterns are available in the shop only June 21-September 3, 2019. Kits will also be available for purchase in-store during this time. (Click here for more information on the Row by Row Experience and the program rules.)

We encourage you to check out each of these fine establishments and Experience the Tastes of Elkin! 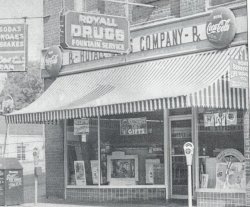 Royall's (photo credit: Elkin Tribune) is an old-fashioned soda shop that has been in its current location since 1923, when it opened as Turner Drug. Elkin's first hospital was located on the second floor of the building. Former Elkin Mayor, George Royall, changed the name to Royall Drugs in 1953. 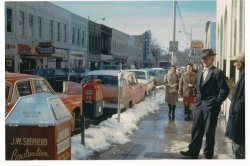 Royall's is best known for their "World Famous Hot Dogs", which have been a staple on their menu for decades. Back in the day, Fisher's Drugs was also on West Main Street (located in the building that is home to Yadkin Valley Quilts, photo from The Reeves Theater). The two store owners had a gentlemen's agreement of sorts — Royall's would sell hot dogs, and Fisher's would sell burgers.

Royall's is now owned and operated by the Holloway family—Brian, Tina, Laura and Austin. They have added mouth-watering burgers to their menu—the patties are hand-formed and the produce sliced fresh daily, which is evident with every bite.

Diners at Royall's are taken back in time by the etchings in the booths from sweethearts from days gone by, and entertained by the train that travels the track along the top of the wall. Royall's made news recently when Drew Perry visited with his two boys and chronicled their experience in the February 2019 issue of Our State magazine. According to Perry, Royall's makes "A Proper Milkshake". We agree, the Holloways serve up some mighty tasty hand-scooped ice cream, weather in a cup with a spoon, or made into a delightful milkshake. 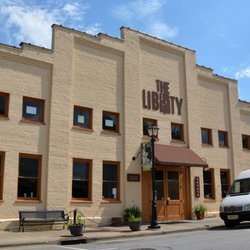 The Liberty (photo credit: Yelp) is an old tobacco distribution warehouse from the early 1900s, situated below the former Hugh Chatham Memorial Bridge (1931-2010), which connected Elkin to Jonesville. The building has been meticulously renovated to house a brewery/taproom downstairs and a restaurant and special event hall upstairs. Cicely McCulloch, one of the partners in the venture, has family ties to the building. She discovered during her deed research that her great-grandmother had once owned the building.

Microbrew aficionados are drawn to Angry Troll's Brewery in the lower level of the building. The offer a variety of craft brew options, with a selection of their offerings also available in the restaurant upstairs.

The restaurant has a sports bar vibe with large televisions televising a wide variety of sporting events. They are known for their wings and wood fired pizzas. Their spinach dip can be a meal in itself, and their burgers and skinny fries are a perfect match! The restaurant has a variety of beer options, as well as a number of local wines. 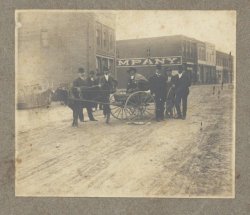 Southern on Main (photo from Surry Historical Society, circa 1905) is located on the south east corner of the intersection of North Bridge and Main Streets. It was home to Casstevens Hardware before being turned into a restaurant. The building first housed a fine dining establishment, followed by Twenty One & Main, before Marla Stern and Gary Eggers opened Southern on Main. The hardware store's "open" freight elevator is a focal point between the bar and kitchen, but is no longer in service due to safety codes.

Locals and travelers alike enjoy casual southern cuisine in this historic building. There is dining upstairs, along with a wine bar. Pet-friendly patio dining is also available.